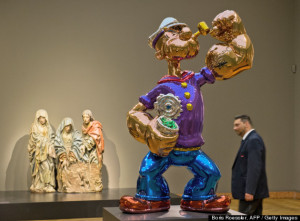 In the latest development in the Perelman Gagosian Lawsuit, Judge Kapnick has dismissed all causes of action, except for fraud related to exchange transactions that included Cy Twombly’s “Leaving Paphos Ringed With Waves.”

The amended complaint had included six claims: breach of contract, breach of fiduciary duty, fraud, breach of the covenant of good faith and fair dealing, unjust enrichment, and deceptive business practices under section 349 of the General Business Law.

This case is important because it raises the question of whether a dominant art context actor like Larry Gagosian has a higher legal burden of accountability and transparency, even that of a fiduciary standard, because of the influence he wields.

Judge Kapnick reinforces that “allegations of superior knowledge or expertise in the art field are per se insufficient to establish the existence of a fiduciary relationship.” The majority of knowledge and power differentials in the art world remain immune to fiduciary review. However, the fiduciary question is central to the complaint, and is referenced twice in the decision, each time dismissed not on substantive grounds, but rather on the specifics of this case. Larry Gagosian’s potential fiduciary exposure appears to be strongly connected to the objective status of the buyer.

The court argues that the “essential elements of a fiduciary relationship are ‘de facto control and dominance.'” There is no question that Larry Gagosian, and those working with him, have at times dominance and control over the market for certain artworks, or even for those of specific artists. Judge Kapnick stresses several times that Perelman contracted through MAFG Art Fund and Macandrews & Forbes Group LLC, and that together they are legally represented, “experienced and sophisticated business investors who entered into negotiated, arm’s-length transactions with defendants.” These facts preclude the finding of fiduciary obligations.

But the decision does not explicitly rule out that someone with comparable influence could be found subject to fiduciary obligations with another buyer. In fact, the court even makes the distinction that the specifics of the relationship between Perelman and Gagosian, who “were friends for 20 years, ‘socialized together,’ were ‘business acquaintances,’ had ‘worked together’ previously and invested together, cannot be addressed because […] Perelman is not named as a party.” Not because such a consideration would be in and of itself impossible. Of course, the finding of a fiduciary standard would not be conclusive in and of itself. Once a fiduciary relationship was established, relief would depend on showing misconduct, and that damages directly resulted from it. These factors can be difficult to prove, and remain a built-in hurdle to uncontrolled fiduciary exposure.

Despite opening the fiduciary door, and then shutting it on these facts, Judge Kapnick focuses on overlapping considerations. The court cannot deny by law that Gagosian “has enormous power to influence, and even set, the markets for the artists he represents because of his impressive roster of artists and his access to and knowledge of the largest private art collections in the world.” As a result, a buyer may be entitled by law to rely on Gagosian’s representations regarding the art market and the value of particular works of art, even if they are sophisticated art collectors and investors.

The potential for increased exposure, based on de facto control and dominance, that can equitably cut through private ordering and force a party to exercise a higher standard of care – call it what you will – feels to me like a harbinger of fiduciary duties to come.